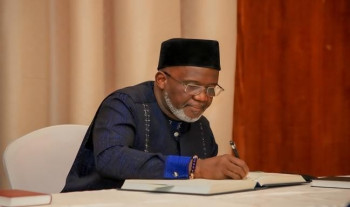 Dr Winfred Nii Okai Hammond is currently Ghana’s Ambassador Extraordinary and Plenipotentiary to the People’s Republic of China, after serving his country as Ambassador to the Arab Republic of Egypt with concurrent accreditation to Lebanon, Sudan and the State of Palestine from April 2019 till June 2021. His professional experiences span from ministerial and ambassadorial for his country, to being international civil servant for the United Nations Food and Agricultural Organization (FAO) and the International Institute of Tropical Agriculture(IITA).

As a technocrat Dr Hammond is an agriculturalist/entomologist and an international civil servant who obtained his Doctrate in Natural Science/Entomology from the University of Leiden in the Netherlands, M. Sc.(Zoology/Entomology) from the University of Ghana/International Institute of Tropical Agriculture, and B. Sc. Agriculture, also from the University of Ghana, Legon. He also had a graduate diploma certificate in Organizational Development from the Gestalt Institute of Cleveland, Ohio (USA) after field training in UK (Scotland), Netherlands (Hilversum), Israel (Tel Aviv/Jerusalem), USA (Washington), and Spain (Barcelona).

He was appointed Ghana’s Deputy Minister for Food and Agriculture in charge of Special Programmes in February 2005. During his relatively short tenure before being seconded to the United Nations Food and Agriculture Organization 2006, he led various initiatives and managed high-level consultations and negotiations for his government. He also facilitated international cooperation and strategic partnerships with bilateral and multilateral development agencies such as the FAO and other UN Agencies, the World Bank, USAID, DFID, AU, ECOWAS, and NEPAD. Being responsible for diverse Special Programmes, he forged strong partnership with several other line Ministries such as Private Sector Development, Local Government, Women and Children, Health, and the Ministry of Employment. He coordinated and facilitated high-level policy dialogue, consensus building, advocacy and diplomatic negotiations, some of which led to extra-budgetary funds mobilization for food value chains. He also led various delegation missions to Asia, Europe, the United States, and Africa for his government.

Dr Hammond retired from the United Nations Food and Agriculture Organization in February 2016 after serving for 10 years. He was FAO Representative in Liberia (2006 -2011) and Rwanda (2011-2012). As FAO Representative, highlights of his experience included providing leadership, on behalf of the United Nations Country Team, on food and agriculture policy and operational matters, strong partnership with government institutions that have the responsibility for nutrition, food and agricultural matters, youth employment, collaboration with national associations and organizations and external partners involved in agricultural and rural development. In Liberia, in particular, he developed and managed emergency, recovery and rehabilitation programmes, and mobilized resources to support these programmes.

Considering his competence as trained Organizational Development expert and many years of experience in a wide range of agricultural disciplines in the field, he was relocated in February 2012 to FAO Headquarters in Rome to assist with the development of the five-year FAO Strategic Programmes for 2014 – 2019, among other responsibilities. As a Senior Officer/Entomologist with the Plant Protection and Production Division of FAO’s Agriculture and Consumer Protection Department, he reactivated the Transboundary Plant Pests and Diseases Unit to address the sustainable management of the increasing global threats to food security by invasive/transboundary insects in the Caribbean and Africa regions. During his last year at FAO and prior to his retirement in February 2016, he was relocated to FAO Sub-regional office in Zimbabwe responsible for all SADC countries, from where he continued in the development and management of programmes aimed at restoring economies affected by the Asian fruit fly which has caused the imposing of embargoes on exports of horticultural commodities in more than 35 African countries.

It is important to highlight that in 2013 and 2014 Dr Hammond was a member of FAO high level mission that conducted assessments of relevant research institutions in China for their certification as “Centres of Excellence” for South – South Cooperation with developing countries through FAO.

Dr Hammond is excellent in written and spoken English, as well as fluent in French which was his working language for about 20 years with all francophone countries in West and Central Africa. Following his expertise and strong passion for the study of insects, he served as the President of the African Association of Insect Scientists (AAIS) in 1993 -1997. Through degree- related supervision, group training, and in-country activities, he has trained and contributed to

the capacity development of hundreds of African scientists and technicians involved in agricultural research and development. He has worked in about 37 countries across West, Central, East, Southern Africa including countries in the Indian Ocean.

Some highlights of his achievements include his decoration by the President of Liberia, H. E. Ellen Johnson Sirleaf, for contributing significantly to the positive changes in the Agriculture sector after a protracted civil war; notably the creation of jobs for ex-combatants who were involved in the 14 years Liberia Civil War. In partnership with the Liberia Ministries of Youth and Sports, Agriculture, and Labour, he organized training of these youth in the manufacture of agriculture processing equipment, provided capital he raised from various donors for various groups amongst them to produce for various value chain operators in the agriculture sector. More significantly the development programmes that led to the increase of the production of rice (the main staple for Liberians) from 80,000tonnes to 200,000 tonnes in 4 years (2006-2010), was considered a stabilizing factor after the war.   At the International Institute of Tropical Agriculture, his applied research resulted in the successful implementation of Classical Biological Control of the continental-wide ravaging pest, the Cassava Mealybug (Phenacoccus manihoti), with a saving of about US$2.2 billion to farmers and consumers in Africa. This research and development work contributed significantly to the King Boudowin Award in 1990, and the World Food Prize Award presented to the then leader of the team, Dr Hans Herren in 1995.